The ESXi Homelab community is constantly growing. When you want to run ESXi in home labs you typically want to have a system that is small, silent, and transportable. To keep costs at a minimum, the power consumption is also a very important factor. The portfolio of Small Form Factor (SFF) Systems, also known as Barebone, Nettop, SoC, or Mini-PC, is enormous. Intel's NUC series is currently the most used system in the homelab market, but I'm always keeping my eyes on its competitors.

Today I'm going to test the Zotac ZBOX edge, which is the newest model in their M series. The Zotac M Series is comparable to Intel's NUC when it comes to form factor, features, and performance. As always, I'm trying to point out where the similarities and differences to the NUC series are.

The Zotac ZBOX edge is currently available with an Intel 10th Gen i3 or i5 CPU, but I assume that there will be a 3rd model with an i7 CPU.

Will ESXi run on the Zotac ZBOX edge?
Yes. ESXi 5.x and 6.x will run on the ZBOX edge, but the network adapter does not work with ESXi 7.0. Unfortunately, Zotac has equipped them with two Realtek RTL8111 NICs, which are not working in ESXi 7.0. There is no driver available and the community driver used in ESXi 5.x/6.x does not work in 7.0. 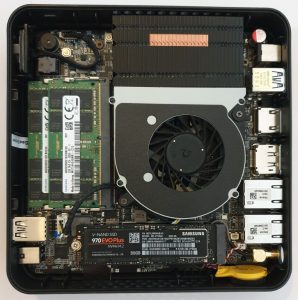 * The ZBOX MI663 has not been officially confirmed yet.

Zotac has a very large portfolio of Mini PCs with over 300 products in X categories. For this article, I've selected the M-Series due to its resemblance with Intel's NUC. If you want to select another system, here is a short description of what to expect from their series. Whatever system you are going to take, keep in mind that Zotac tends to use Realtek network adapters which are not working with ESXi 7.0.

The ZBOX M-Series is, similar to other consumer-based SFF systems, not officially supported by VMware and not listed in the HCL. Not supported means that the hardware is not certified and you can't open Service Requests with VMware when you have a problem. It does not state that it won't work.

Zotac has equipped their ZBOX Edge systems with two Realtek network adapters. While it is nice to have an SFF system with two network adapters, Realtek adapters are not supported by ESXi. The problem can be solved with a community created driver which works in ESXi 5.x and 6.x but unfortunately not in ESXi 7.0, due to the VMKlinux driver stack deprecation.

Network (Realtek RTL8111) - "No Network Adapters" Error
The Network adapter does not work with any stock ESXi image. You have to create a customized image containing the Net55-r8168 driver by Dmitry Nechaev.

The driver works with ESXi 5.x and 6.x but not in 7.x. There is no working driver for ESXi 7.0 available at the moment. Refer to the Installation section for instructions on how to create a custom ESXi image.

Wake on LAN Problems
The Frost Canyon Intel NUC has an issue that the NUC does not respond to Wake on LAN packets when it has been previously powered off from the vSphere Client. This problem does not happen with the ZBOX Edge. WOL is enabled by default and works in every state.

Storage
The storage controller works out of the box without any issues. You can install NVMe or SATA based M.2 drives. There is no SATA connector on the ZBOX Edge. Be aware that you can't install two full-size M.2 drives. It has two different connectors: 22×80 and 22x42.

SD Card
The ZBOX Edge has an SDXC slot. Unfortunately, there is no driver available for ESXi at the moment so it's not possible to use the SD Card slot. I recommend installing ESXi on a USB flash drive.

The box contains a short description explaining how to open and assemble the components. The system is, compared to Intel's NUC, thinner and lighter. The chassis is made of plastic but has a good build quality. It also has venting holes on the top, so you can't stack them as you might do it with Intel NUCs. 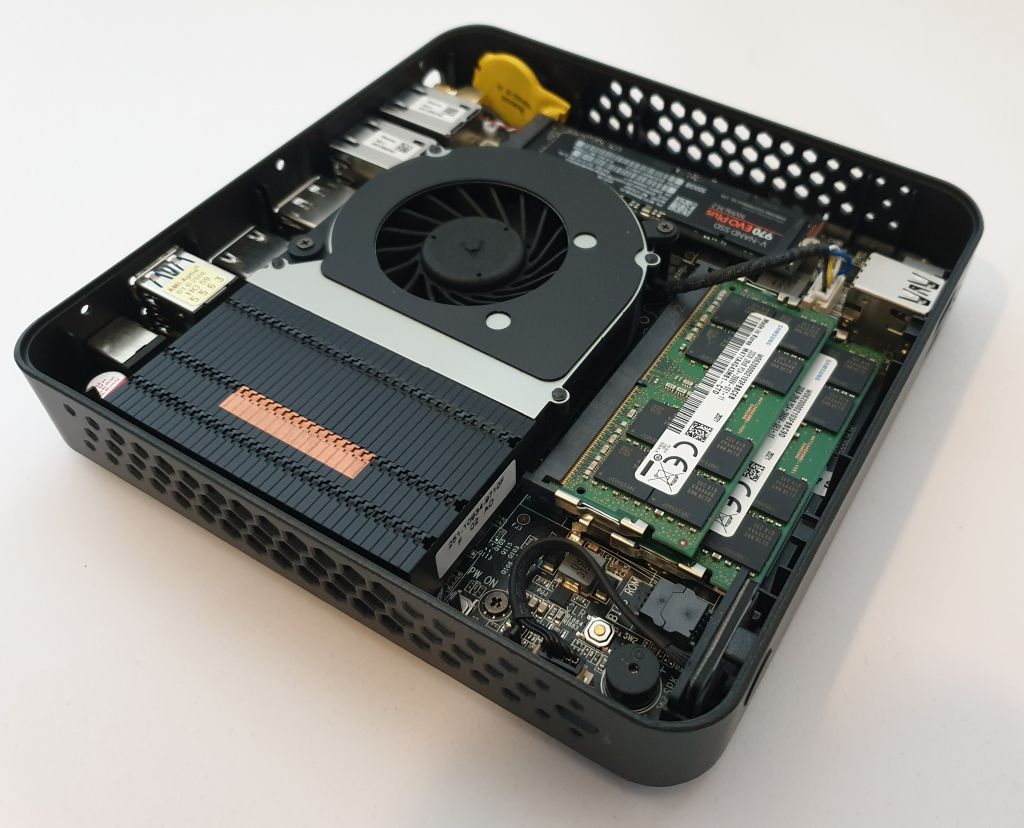 The installation is very simple. Remove the 3 small screws on the backside with a Phillips PH00 to remove the lid. To install the M.2 drive, you need a Phillips PH0. Memory modules are just clicked. 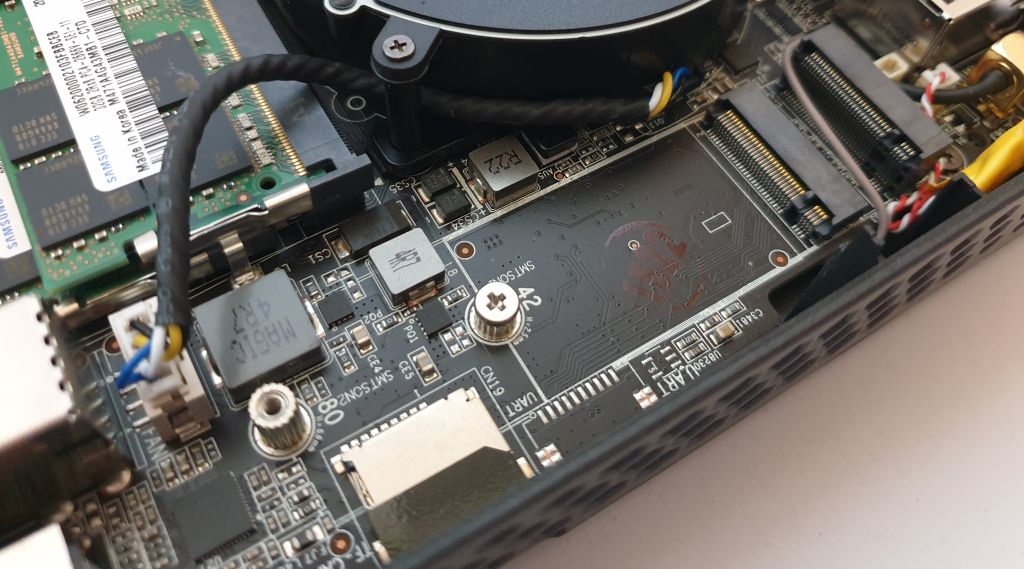 If you try to install any version of ESXi, the installer fails with a "No Network Adapters" error. The problem is that there is no compatible driver in any ESXi version. Luckily, you can use the community supported Net55-r8168 driver by Dmitry Nechaev.

How to create a Custom ESXi Image
This option explains how to create the Custom Image with PowerCLI. The Image can be used to install ESXi from scratch. William Lam has also provided a solution that uses the vSphere HTML5 Client.

If you want to install ESXi 7.0, you have to use a USB-bases Network adapter. See this article for instructions on how to create custom images containing the USB NIC Fling.

The performance of a single ZBOX Edge is sufficient to run a small home lab including a vCenter Server and 3 virtual ESXi hosts. It's a great system to take along for demonstration purposes.

The following chart is a comparison based on the NUCs PassMark scores: 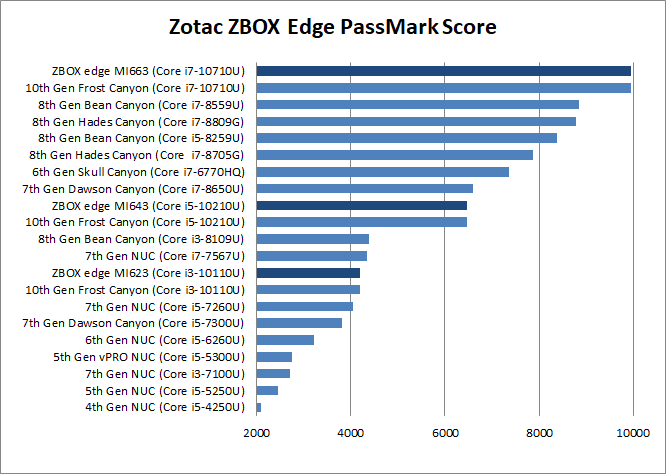 SFF systems have a very low power consumption. I've measured the power consumption of my ZBOX edge MI643 (10th Gen i5 CPU) in 3 states: Idle (ESXi in Maintenance Mode), Average Load (1 vCenter, 4 Linux VMs) and during a Stress test. The system has been configured with 32GB RAM and a Samsung NVMe drive. The power policy was configured to "Balanced".

When looking for NUC alternatives, it usually comes to price comparison. The ZBOX Edge is nearly identical to the Frost Canyon NUC by Intel. The second embedded NIC in the ZBOX is really great, but unfortunately unusable with ESXi 7.0 at the moment.

Currently, the ZBOX Edge is about 30% more expensive than the NUC. This might change as the ZBOX has been released about 6 months after the NUC.

I would not say that the ZBOX is a good alternative unless the price drops and a native ESXi Realtek Driver is available to support ESXi 7.0.