Intel's Alder Lake-based 12th Gen "Wall Street Canyon" NUC Professional series is currently been shipped out. This article takes a deep look at their capabilities to run VMware ESXi. While VMware does not officially support NUCs, they are ubiquitous in many home labs and test environments. They are small, silent, transportable, and have very low power consumption, making them a great server for running your inexpensive home lab. The Wall Street Canyon is available with i3, i5, and i7 CPUs. The i5 and i7 versions are also available with vPro Support. 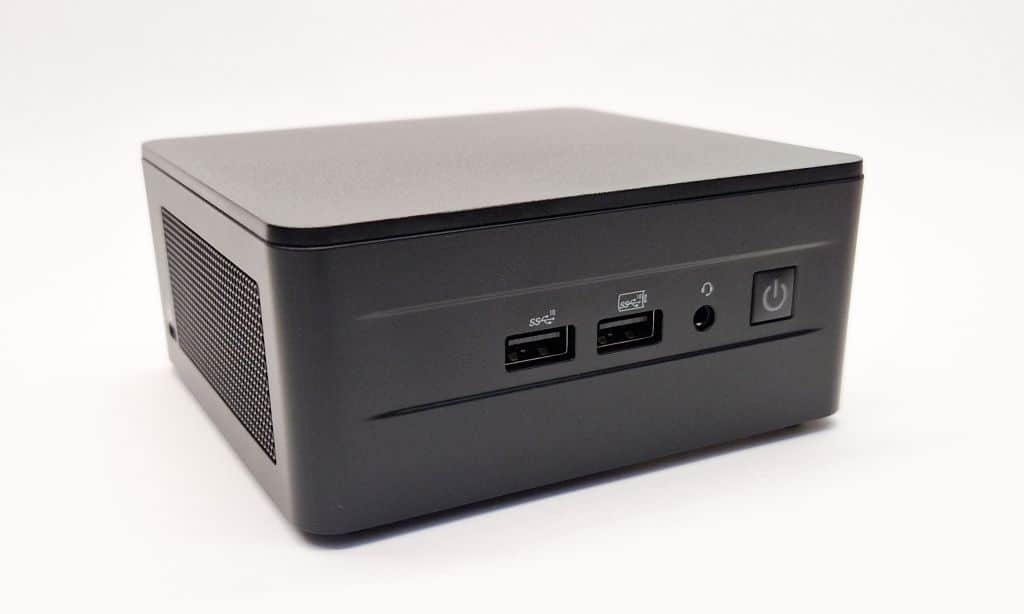 The Wall Street Canyon is Intel's professional line from their 12th NUC Generation and the successor to the 11th Gen Tiger Canyon. This system is intended for professional use cases and has significant enhancements for your homelab running ESXi. Like the previous generation, it has an expansion bay that allows you to install a second network adapter. 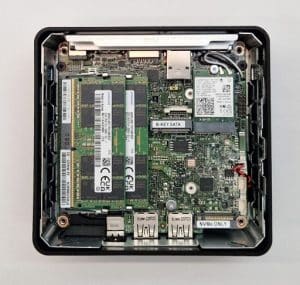 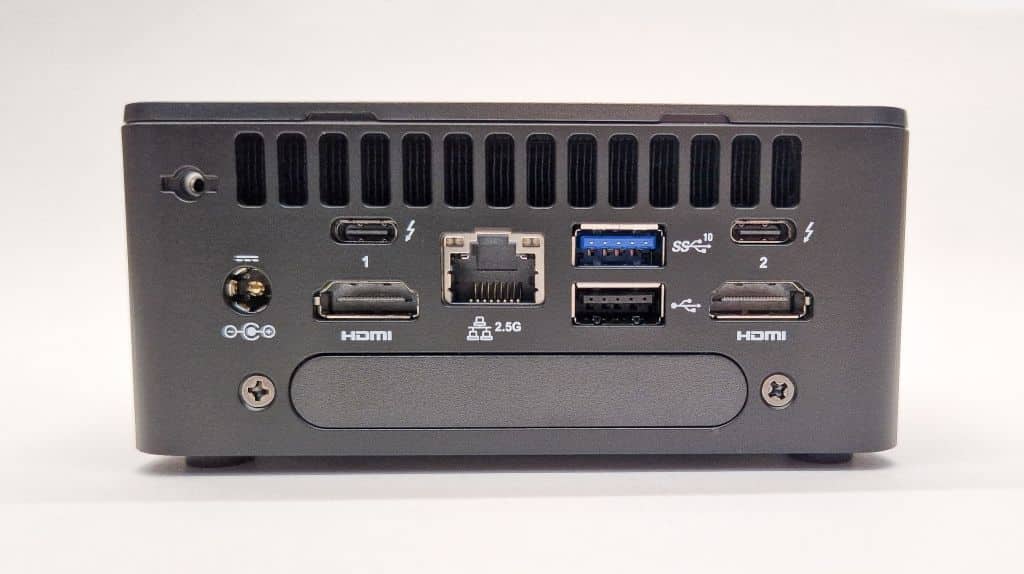 The Wall Street Canyon NUC is available with 5 different CPUs. Each version is available in different configurations. The following table explains the various options:

Intel NUCs are not supported by VMware and are not listed in the HCL. Not supported means that you can't open Service Requests with VMware when you have a problem. It does not state that it won't work.

ESXi 8.0 - ESXi runs out of the box with the original image.

ESXi 7.0 - The Community Networking Driver for ESXi is required.

Currently, there is no driver available for ESXi 6.x

Network (Intel I225-LM) - "No Network Adapters" Error with ESXi 7.0
The Community Networking Driver for ESXi is required to install ESXi 7.0 on the 12th Gen NUC. See Installation for instructions.

Storage (AHCI and NVMe)
The storage controller works out of the box with ESXi 7.0 and ESXi 8.0.

When you try to install ESXi 7.0 or 8.0 on a system with a 12th Gen Intel CPU, the installation fails with a purple diagnostics screen:

This problem is caused by the new CPU architecture which includes different types of cores - Performance-cores and Efficient-cores. With vSphere 7.0 Update 2, the kernel parameter cpuUniformityHardCheckPanic has been implemented to address the issue. The option can be configured with the following command:

An easy workaround is to temporarily disable E-cores, install ESXi, set the parameter, and re-enable E-cores. If you want to keep E-cores enabled during installation, see this article with a scripted install example.

If you want to use ESXi 8.0, just download the Image and create a bootable USB flash drive.

If you try to install ESXi 7.0, the installer fails with a "No Network Adapters" error. A driver for the Intel I225-LM 2.5GbE adapter is not bundled in the standard ESXi Image but is available as a community-based VMware Fling. 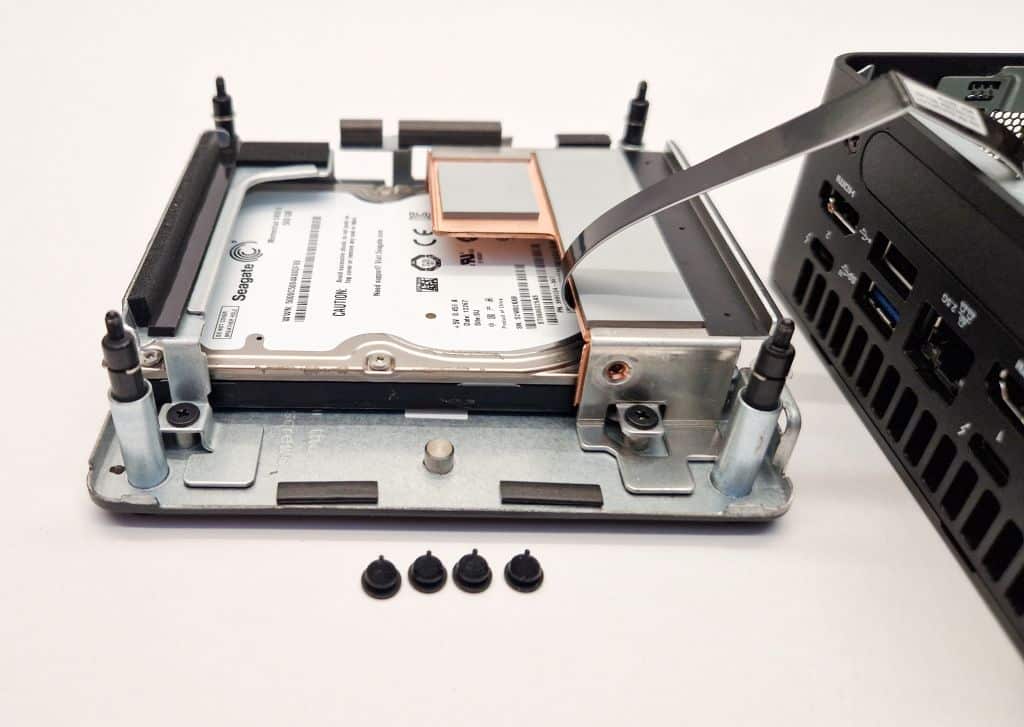 How to create a Custom ESXi Image
This option explains how to create the Custom Image with PowerCLI. The Image can be used to install ESXi from scratch.

If you have already installed ESX (with a USB NIC for example) you can install the newer driver with the following command:

The performance of a single NUC is sufficient to run a small home lab including a vCenter Server and 3 virtual ESXi hosts. It's a great system to take along for demonstration purposes. If you have multiple systems and a vCenter Server you can build a powerful cluster.

The following chart is a comparison based on the NUCs PassMark score. The performance gap to previous generations is huge, which is a result of going up from 4 to 16 Cores. 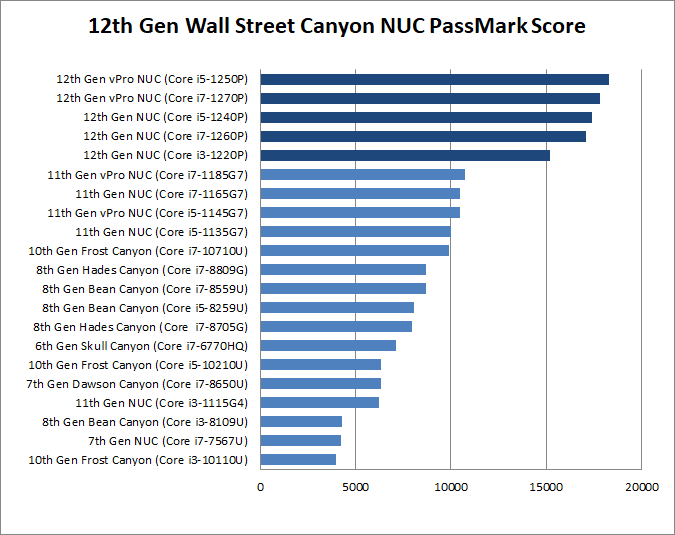 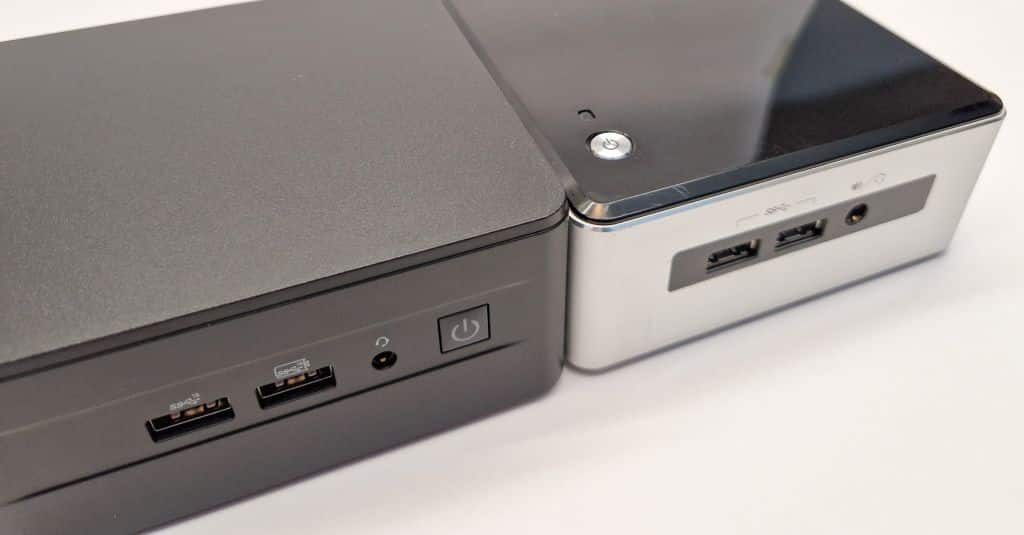 NUCs have a very low power consumption. I've measured the power consumption of a NUC12WSHv5 in 3 states: Idle (ESXi in Maintenance Mode), Average Load (1 vCenter, 4 Linux VMs), and during a Stress test. The NUC has been configured with 64GB RAM and no HDD or SSD. The power policy was configured to be "Balanced".