With the release of vSphere 7.0 Update 1, VMware introduced a new licensing model for its Tanzu Kubernetes integration. Basically, the licensing has been changed from an ESXi-Host license to a Cluster license that looks familiar to the vSAN license which is in place for a couple of years. The change does only affect how you have to apply the license. The entity to pay for is still a physical CPU.

In vSphere 7.0 GA, the license required to enable Kubernetes (aka. "Workload Management") was an add-on license for ESXi Hosts named "vSphere 7 Enterprise Plus with Kubernetes". With the introduction of vSphere 7.0 Update 1, which is also referred to as 7.0.1, "vSphere add-on for Kubernetes" has been rebranded and split into 4 licenses Tanzu Basic, Tanzu Standard, Tanzu

When you are working with the Kubernetes Integration in vSphere 7.0, you might come into the situation where the SupervisorControlPlaneVM has an active alarm. Those Virtual Machines are deployed and controlled by the WCP Agent and even as an Administrator, you are not allowed to touch those objects.

You can't power then off, reboot, or migrate them using vMotion. The problem is that you can't even clear alarms. One alarm I recently had was the "vSphere HA virtual machine failover failed" alarm, which you usually see when the ESXi hostd crashed, but the Virtual Machines are still running.Read More »Quick Tip: Reset Tanzu SupervisorControlPlaneVM Alarms

This is the last part of my "VMware vSphere with Kubernetes" Guide. In this article, I'm going to give you two tools that will help you to get a better understanding of Kubernetes features. Both tools, Octant and Lens, are free and Open Source. The main difference is that Octant is browser-based and Lens is an Application.

This is Part 6 of my "VMware vSphere with Kubernetes" Guide. In this article, I'm going to deploy a Tanzu Kubernetes Cluster (TKC). A TKC is a fully-featured version of the open-source Kubernetes container platform. You can provision and operate Tanzu Kubernetes clusters on top of the Supervisor Cluster.

This is Part 5 of my "VMware vSphere with Kubernetes" Guide. In this article, I'm going to create a custom Docker image, push it to the embedded Harbor Registry, and deploy it to the Supervisor Cluster.

This is a part of a series. If you do not have a Kubernetes activated vSphere Cluster, refer to Part 1 to get started with the deployment.

This is Part 4 of my "VMware vSphere with Kubernetes" Guide. In the last article, I've explained how to install and configure the Kubernetes CLI Tool kubectl and how to deploy the first pod. In this article, I'm taking a deeper look at kubectl.

This is a part of a series. If you do not have a Kubernetes activated vSphere Cluster, refer to Part 1 to get started with the deployment.

This is Part 3 of my "VMware vSphere with Kubernetes" Guide. In the previous parts, I've explained how to enable Kubernetes in vSphere, deploy the Harbor Registry, and create a namespace in the Supervisor Cluster. Now it's time to get familiar with the Kubernetes CLI Tool kubectl and to deploy your first pod.

If you do not have a Kubernetes activated vSphere Cluster, refer to Part 1 and Part 2 for instructions. 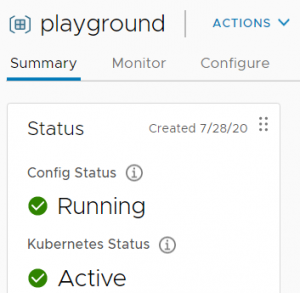 This is Part 2 of my "VMware vSphere with Kubernetes" Guide. In the last article, I've explained how to get "Workload Management" enabled in a vSphere cluster. At this point, the cluster is successfully enabled to support Kubernetes, but what's next? Before I start to deploy the first container I'm going to enable additional services, create a Kubernetes Namespace in the Supervisor Cluster, and explore the deployed components in vCenter and NSX-T.

With the release of vSphere 7.0, the integration of Kubernetes, formerly known as Project Pacific, has been introduced. vSphere with Kubernetes enables you to directly run containers on your ESXi cluster. This article explains how to get your cluster enabled for the so-called "Workload Management". 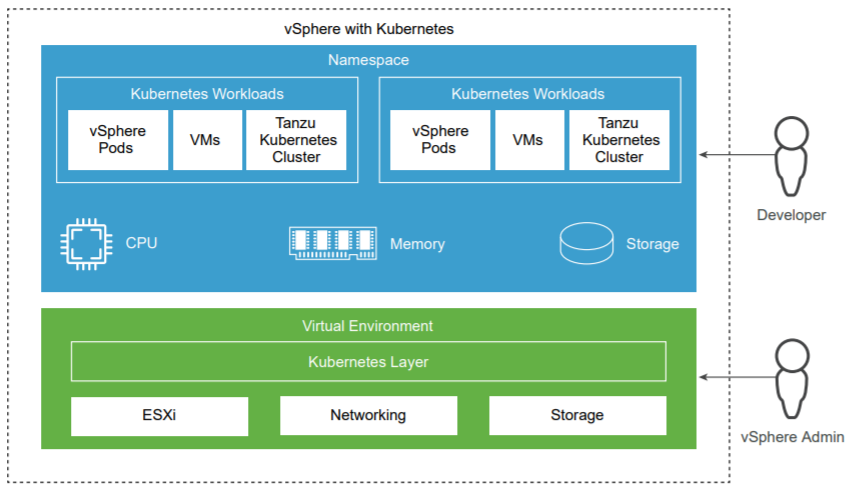