Which vSphere 6.0 Features are available in Editions?

VMware vSphere 6 has been released to the market 4 weeks ago. There are many new features and enhancements, but as you know there are different pricing and licensing models. It is available as a la carte licensing priced on a per CPU basis or in packs of 25 VMs and for small deployments as Kits. This post takes a look on the availability of new vSphere features in different vSphere editions.

Read More »Which vSphere 6.0 Features are available in Editions?

vSphere ROBO vs. per CPU Licensing

vSphere ROBO is expected to be available in Q3 2014.

The next version of vSphere is currently in public beta state. While the beta is still under NDA, VMware has announced some features at their VMworld 2014 conference:

Hewlett Packard has updated its widely distributed Microserver Series to Gen8. This extremely affordable server which was initially made for SMB and home servers has become very popular in the virtualization scene. Due to its low price and power consumption you can find this system in many virtualization home labs. The Generation 8 Microserver (Gen8 or G8) comes with more power, upgraded ports and an integrated iLO. The HP Microserver Gen8 is available in 2 versions - G1610T and G2020T. Both models are equipped with a 2 core CPU and can support up to 16GB of RAM. The system is shipped with 4 hard drive trays, which allows the installation of any SATA hard drive. It also has a CPU socket, so you can change the CPU.

As VMware has announced it at VMworld in San Francisco, the new release of its flagship server virtualization product is now available for everyone. Grab… Read More »vSphere 5.5 Download – Public Available!

When you want to build a VMware vSphere Lab at home, Intel might have a great system for you: The Intel NUC family - The Next Unit of Computing. The system was initially designed to be used as home theater or digital jukebox. Due to it's power it is also a fully adequate replacement for a desktop computer. The Intel NUC is big on performance and surprisingly small in size and power consumption and thus makes it a great candidate for a virtualization home lab. 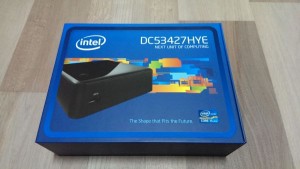 The Intel NUC System is available as system board only and with a chassis. Currently there are 4 models available, beginning with an Intel Celeron processor and ending with a powerful Intel Core i5 vPro processor: